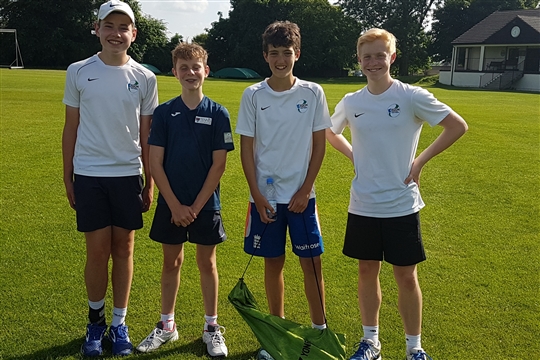 On a beautiful but very warm sunny afternoon, the U14 team of Luke Thomas, Max Mobey, Joshua Watson and Matthew Harris travelled to Minchinhampton for a very tough final match of the season in the Gloucestershire U14 Division 1 Team Tennis league.

Luke and Max played their opposing number in singles matches first, whilst Josh & Matthew faced Minchinhampton’s numbers 3 & 4 in the doubles.

At the halfway point, Lechlade were two rubbers to one down, with only Luke having achieved a win so the pressure was on for Luke & Max in their doubles and for Josh and Matthew in their respective singles matches.  All of the matches were incredibly close but thankfully Luke & Max persevered coming out on top and coupled with a win from Matthew put both teams tied on 3 rubbers each!

The tension was palpable as the deciding match tie break started.  With each team nominating one player from each of their doubles pairs, Luke & Josh (1&3) faced Minchinhampton’s number 2 & 3 players.  At 8-8 it was all play for but Josh put away the volley of the match and with some solid serving from Luke and great tactical doubles play as a pair, to great relief for the team, Lechlade emerged victorious.

Having won all but one of their matches, the U14’s wait to see where they will finish in the league once all matches have finished.

Congratulations to Luke, currently top individual in the league table and who out of 16 sets played hasn’t dropped a set all season!