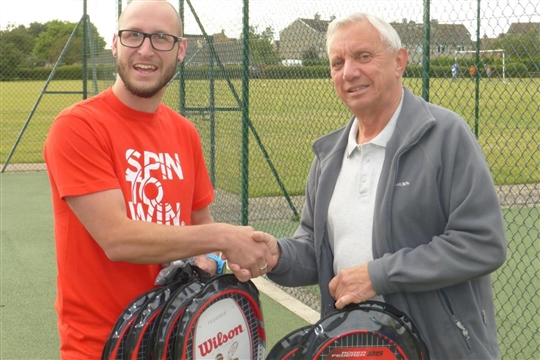 A resident of the town, Dominic put forward the good will gesture in the wake of a flurry of suspected arson attacks, starting with the Memorial Hall, which burned down on May 8.

He said: "Our company has a scheme where, for charity, it donates sports equipment to communities each year for free.

"When I received an email about suggestions for this year's donations, it was literally just two of three days after the Hall, next to the tennis courts, had burnt down and it was the first thing I thought of because I know how upset so many people have been about it."

The batch of new racquets – three junior and six senior – were tried out by members at the launch and will be readily available to anyone looking to play a game at the club.

Mr Musson said: "It's a wonderful gesture by Dominic and by Amer Sports.

“He's done it because of the depression here about the Hall. He wants to put something into the community, and we're very grateful to him.